Blog > APIs > API vs SDK – What’s the Difference? (with Examples) 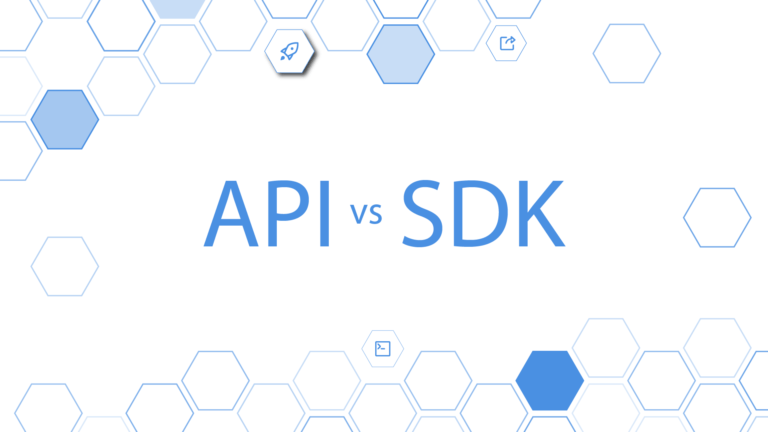 Application Programming Interfaces (APIs) and Software Development Kits (SDKs) both have different roles in the software development process. Since there is a lot of overlap between the two, it can be confusing to understand the difference. Knowing how an API and SDK differ and function can help you decide which one you will need for your project.

What is an API?

An API, or Application Programming Interface, allows your application to interact with an external service using a simple set of commands. To break down the name, the “Interface” is where different software components can interact. Using an API allows developers to add specific functionalities to their applications and can speed up the development process.

For example, rather than investing time and resources to create their own payment processing system, many applications use a payment processing API instead. To learn more about APIs, check out the full guide and see how to use them here.

Examples and Use Case For APIs

Most of the applications you use every day rely on APIs in some capacity. There are APIs for nearly every category imaginable from location services to SMS to Finance.

Consider how this might play out using a ride-share app as an example. First, you sign up for the ride-share application. Then, you can map your route, find your driver, and pay for the ride all without ever leaving the app.

The ride-sharing app is likely using APIs to make all of this work. For example, an API like Telesign could verify that you own the phone number you provided at sign up. Calculating the time and distance of the ride is probably done with a maps API. An SMS API like Nexmo could notify you that the driver has arrived at the pickup location. When it’s time to pay, your payment is likely processed with an API like Stripe. Finally, when you get a receipt for your ride, this is sent to your email with an API like SendGrid.

All of these APIs act like building blocks, allowing developers to build applications much faster. They also prevent developers from having to “reinvent the wheel,” and spend time creating functionality that already exists.

What is an SDK?

An SDK, or Software Development Kit, is a set of tools, guidelines, and programs used to develop applications for a specific platform. Suggested by the name, an SDK is a kit for developing software. SDKs can include APIs (or multiple APIs), IDE’s, Documentation, Libraries, Code Samples, and other utilities. SDKs boast a set of robust features and functionalities which reduce the complexity of developing programs and applications.

In some situations an SDK is critical. For example, you need the iOS SDK to create iOS applications. To learn more about SDKs, check out the full guide and see how to get started here.

Examples and Use Case of SDKs

Downloading the iOS SDK gives developers all the tools they need to create iOS applications, and its popularity makes it a good example of an SDK. The iOS SDK contents are split into 4 different sets, and each set contains a variety of utilities. For example, the Cocoa Touch set includes accelerometer support, camera support, multi-touch events and controls, and other graphical control elements. The iOS SDK also includes an iPhone simulator, which lets developers test their applications from their computer on a simulated iPhone.

SDKs are powerful tools used to create new applications since they include a variety of utilities. The iOS SDK is just one example of the many SDKs that are available for developers. Other examples of popular SDKs include the Java Development Kit for Android apps and the Cloud SDK for Google’s Cloud Platform.

What is the Difference Between an API and SDK?

APIs and SDKs are similar, so it can be difficult to understand exactly what the difference between the two is, or when you should choose to use one or the other. Another possible source of confusion comes from the fact that SDKs often contain one or more APIs and help implement them. However, an API won’t always have an accompanying SDK.

While an API is purpose-built to perform a specific function of allowing communication between applications, an SDK is an integrated platform that boasts a set of tools to create these applications. APIs facilitate and allow interaction between applications, but they alone are not enough to create a brand new app. In other words, an API might be better for your project if you are looking to add a few specific features. If you are starting a completely new project, an SDK will provide the tools you need to get up and running.

A Non-Technical Explanation of API vs SDK

If you are trying to explain the difference between an API and an SDK to a non-developer or someone who is less familiar with the concepts, consider using the different parts of a house as an analogy. In this situation, the SDK represents the entire house: all of the rooms, furniture, telephone lines, and other components. An API represents just the telephone lines that allow communication in and out of the house.

Though this isn’t a perfect example, the house analogy helps convey the fundamental differences between an API and an SDK to someone who might not be as familiar with technical concepts.

APIs and SDKs are similar, but both have distinct characteristics and advantages. Understanding the differences can help you choose which is best for your project. Review the chart below for a reminder of the key differences between an API vs SDK.

Comparison of API vs SDK