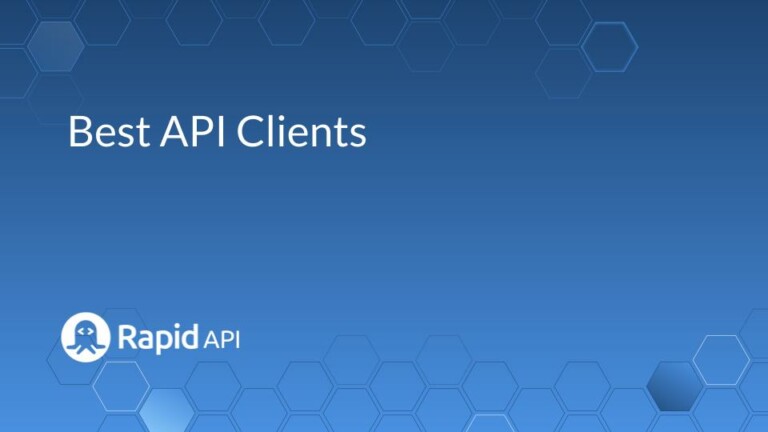 What Are the Best API Clients?

With so many options, it’s easy to find yourself with a paradox of choice when choosing software. Indeed, this is the case with API clients.

Furthermore, best is a relative term. What you are looking for—knowing my search experience—is the most value for the time and money you’re willing to invest. And we derive value differently. Therefore, I hope to list the best API clients and discuss their features and benefits. And other relevant information.

By the end of the article, you’ll have a filtered view of API client options that either solves your search problem or opens the door to more questions that you need to answer before finding the right solution.

What is an API client?

API stands for Application Programming Interface. So, for example, let’s imagine a database running on a server (physical or virtual machine), and the database doesn’t have an API. Consequently, nothing outside of that server communicates with the database.

We decide to build an API for that database to access the data, so other servers and applications can send requests and reach the data.

The other servers and applications that use our API to access the database are referred to as clients. So you could say that our database is servicing their requests, making them the server’s clients.

APIs use protocols to communicate with API clients, which makes network requests standardized and less complicated. The most well-known protocol, HTTP, shuttles data between the server and client, allowing them to transfer data effectively over the network using the API.

Employing another example, we can represent an HTTP API request for Javascript and Python with the code below:

The representation is the same because the network request uses HTTP regardless of the programming language.

Conversely, to create an HTTP request in Javascript and Python, the code could be:

Difference Between API Client and Client?

After understanding the API landscape and the statements above, you could start to intuit the benefits of using API client software.

Benefits of Using an API Client

Without the need to develop a full range of tests for each programming language, developers can focus on testing their API with HTTP requests. API clients are advantageous because they help us, among other things, generate HTTP requests for our API. A list of benefits may include:

API clients are also known as API testing tools because they are primarily used for testing the response data of an API route. These testing tools help teams perform functional API testing, load testing and help developers with exploratory testing.

Some client tools can generate API client libraries for different programming languages and provide sample code. Again, this is a benefit to developers who always seem to be in a hurry.

Users can import API specifications directly into clients. If enough information is provided, some clients can create and host mock servers to test APIs before they are built.  This can help speed up development time.

The key to most of the benefits of API client tools is automation. They can automatically generate tests, requests, documentation, and libraries, bringing substantial time savings to teams working on maintaining or building APIs.

Now that we have an understanding of what an API client is and the benefits let’s take a look at the best API clients available.

RapidAPI Design by Paw is one of the latest products added to RapidAPI’s suite. Starting with their API marketplace, RapidAPI now has team collaboration, an enterprise hub, API testing, and an API client after they acquired Paw.

Additionally, the desktop application and the cloud service sync so APIs, environments, and groups are shared. The cloud sync feature extends to collaboration with the ability for individuals and teams to support API versioning and branching. Updates are driven by push and pull requests in real-time.

RapidAPI Design by Paw has the features that most API clients have, and users expect. To start, you can import API specifications in RAML, API Blueprint, Postman Collection, etc.

You can build API requests inside an HTTP testing sandbox, where you can:

The client has the ability to handle requests using a wide range of authentication or authorization methods:

If your API is concerned about authentication and data security, the software use end-to-end encryption for data handling.

Postman is another popular API client that’s widely used. However, most users interact with Postman through the desktop application that syncs environments, APIs, documentation, and more through Postman Cloud.

With Postman, the user can generate (based on the API schema):

Similar to RapidAPI Design by Paw, Postman has a range of options for API client security:

Advanced REST Client (ARC) was the first API client I personally ever used. I have since moved on, but it was a simple API client that helped get me started as a beginner.

The quote above is a justifiable representation of what you get when using ARC. It’s a straightforward interface with basic features:

However, its strength is also its weakness. It’s simple and free, but you may be limited (and especially your team) on the features. For example, there are no syncing, branching, or collaboration features that are helpful in other clients.

Finally, as a consequence, the tool is compatible with Mulesoft’s Anypoint Platform.

Nightingale is a Windows 10 focused API tool. You can send and inspect request and response data while using dynamic variables, environments, and workspaces.

Similar to ARC, the tool is free and available through the Windows App store. You can view the software on Github, but it is not an open-sourced app. In contrast to ARC, the tool allows users to generate mock servers.

Finally, you can batch multiple requests together to send API calls in collections.

However, the paid version of ReadyAPI has many other features for testing, performance, and automation.

One of the noteworthy categories with increased features is testing. With a pro version, you can use assertions, inspect test logs, create reports, integrate with Git, run security scans, run automatic functional and security tests, plus more.

The tool can generate reports for analytics, monitoring, and of course, integrates with other Smartbear software products.

These features, among many others, are part of the Pro plan, but the pro plan is broken into three modules, each with its own pricing.

There is an API Test, Performance, and Virtualization Module. Currently, the pricing is broken down as:

Additionally, the modules may be bundled.

Runscope is not very similar to other API client tools that we’ve discussed so far. Although the tool focuses on monitoring, it shares many of the same features as other tools.

With Runscope, you can set up API monitoring and make assertions for JSON and XML data. Also, you can test with dynamic variables validating HTTP headers, status codes, and response bodies.

The platform can write custom Javascript snippets and integrations that include Jenkins, Slack, HipChat, and PagerDuty.

Runscope has a series of pricing plans starting at $79/mo. This plan covers 250k API requests and allows for up to 5 users.

Rest-Assured is API validation and testing software for REST services in Java. The software is different in many ways from other client applications we have discussed so far. It’s written, in code, instead of being set up through a user interface or configured through a cloud platform.

The software is free, and the source code (along with testing examples) is available on Github.

On Github, the project is described as:

REST Assured is a Java DSL for simplifying testing of REST based services built on top of HTTP Builder. It supports POST, GET, PUT, DELETE, OPTIONS, PATCH and HEAD requests and can be used to validate and verify the response of these requests.

You can use the documentation to discover how to:

Capping off the list of API clients is Insomnia. The client supports requests for REST, SOAP, GraphQL, and gRPC.

With Insomnia, users can set up environment variables, chain requests, and dynamic variables. This allows users to set up test suites, assert JSON payloads, or assert other response data.

Inso is a CLI tool to accompany Insomnia. You can use Inso to:

Insomnia supports many different types of authentication methods for sending requests to an API.

Insomnia is open-source software that is available to download on Mac, Windows, and Linux. Therefore, installation and usage of the software are free.

Summary: Paw vs Postman vs Advanced REST Client vs Nightingale vs ReadyAPI vs Runscope

Below is a summary table with data from the API clients listed above1.

An API, Application Programming Interface, allows client applications to communicate with a server. Similar to how a user interacts with an application through a user interface, an API is for computer programs that don't need to see data exchange.

What are the general features of API testing tools?

What is the importance of API testing in agile development?

API testing is important because it helps developers refactor code and understand when requirements are met. Furthermore, API testing can help teams perform regression and functional testing for their application. So, as requirements change, they can use API testing to track their API's performance or functional impacts.

What are HTTP clients?

HTTP clients use the HyperText Transfer Protocol to exchange data with other applications or servers. Therefore, the terms HTTP clients and API clients are often used interchangeably.

1 All data compiled from software website or personal use

How to Design an API