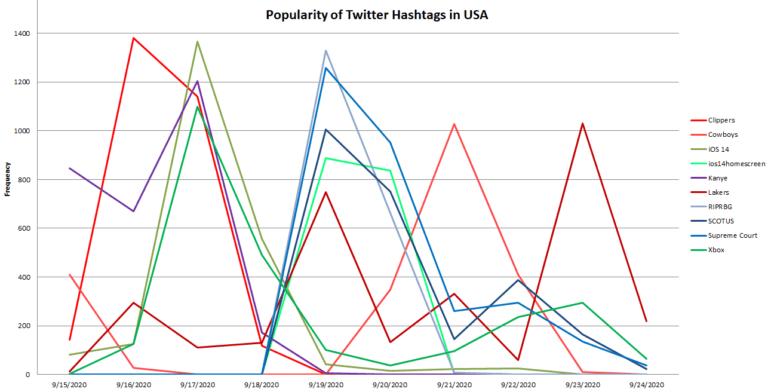 Trending topics on Twitter have become a common source of news articles in recent years.  In this article, we will walk through how to use a Twitter API with Python.  The data will be downloaded to populate a database.  The database will be queried to generate data for a trend chart of popular topics over the last 10 days.

First, we need to get a free API Key. The Twitter Trending Topics Archive API is the API we will use. We will use it to capture the trend data of popular hashtags.  RapidAPI hosts the API so the first step is to get a RapidAPI API Key if you don’t have one already.  That is a quick process, you get a Key after you register at RapidAPI.com.

There are several Twitter APIs on RapidAPI.  I chose the Twitter Trending Topics Archive API for two main reasons.  It is very simple to use and provides reliable data that can be used to generate trends over time.  On the endpoints page, there is a blue button in the middle called “Subscribe to Test”.  Once you click that you can choose the free option to start with. Then you can enter a date, select a country, and click the Test Endpoint button to make an API call.  The result is a link that can be used to download the popular tags.  The data in the file is from the country requested and broken down by hour.

Step 3. Use Twitter API with Python to populate a database

Using the link retrieved from the API, we can download a CSV file with a day’s worth of data. For this article, I left the default country set to the US and set the date to be the previous day. The previous day is the default if you don’t select anything.

The usage model for this is a daily scheduled task, which is fine since each download provides 24 hours of data.  Below is the full Python code to make an API call, download the CSV file, and import the data into a local MySQL database:

To hold the data captured over several days we can use a table like this in MySQL.  This structure matches the queries above in the Python code:

Step 4. Export the popular topics over time into a Comma Separated Values file

Once we collect the data into a database table and index it (see keys above), we can export data summaries. Within the data from the default country the US there are 64 possible locations listed. These locations refer to major cities.

There are records for each hour, so you could see Twitter trends by the hour and/or by location. You can pull this data within one country or between different countries. I first tried to break it down by hour for all locations. I found many hashtags that appeared in every location for a given hour. A chart showing over a hundred data points at the same value would not be meaningful. Then I pulled summaries by day and got lots of variations.

First I pulled a list of Twitter hashtags which were the most popular over 10 days. I used this query for that: select hashtag,count(*) freq from `twitter_popular_tags` group by hashtag ORDER BY `freq` DESC limit 10;

Once I had that list, I put it into a subquery.  I used the subquery to get frequencies of those hashtags by day like this:

Step 5. Use the data to generate a trend chart in Excel

The query above resulted in 61 records, but I had to split them by hashtag and line up the dates. Excel requires this to put them all on the same chart (shown below). I came up with 3 categories and one oddball Twitter topic among the top 10 most popular for September 15th to 24th. I made the sports hashtags a shade of red, political topics blue, and technology green. Kanye is the purple oddball because it is difficult to fit him in one category.

What can we learn from this trend chart?  I did a bit of research to understand what happened on the dates when different topics spiked:

In this article worked through how to use a Twitter API with Python.  Specifically, the Twitter Trending Topics Archive API which provides a wealth of data for download.  We can mine this data for interesting information.  For example, it is clear that more people follow the Clippers, Lakers, and Cowboys than the Falcons or Nuggets.  Also, the period of time people keep tweeting about events seem to be different depending on the topic.  Tweets about the passing of a Supreme Court Judge were popular over several days, but sports games tailed off rather quickly.

There are many possible applications of this data for localized marketing efforts around the world.  It’s enlightening to find out which topics people engage with compared to what is announced in the news.

How to use the Social Media Data TT API with Java, Python, PHP, Ruby and Javascript Examples

Robert Davis is an IT Consultant with the following areas of emphasis: