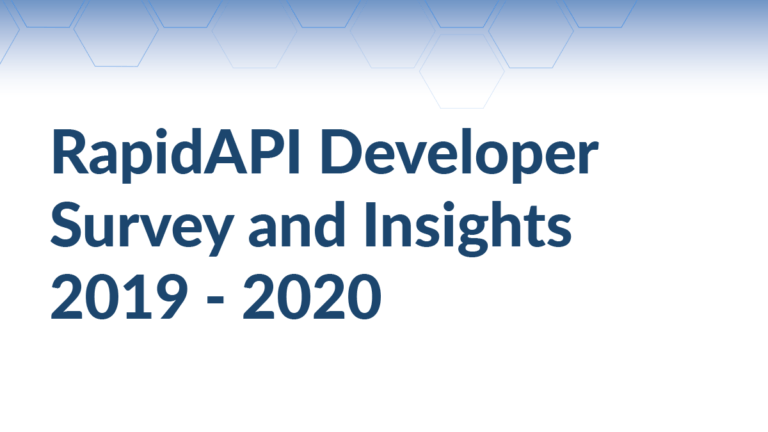 Thank you to everyone who participated in the 2019 RapidAPI Developer Survey! In total we had over 2000 participants, representing over 600 unique job titles and 104 different countries.

This survey was open to developers of all backgrounds. Over 50% of respondents identified themselves as Professional Developers, 24% as Students, and 23% as Hobbyists. Nearly 14% indicated they were Engineering Managers (multiple selections allowed).

This survey confirmed what we already expected — APIs continue to be an important tool for software developers. Companies of all sizes and from a wide range of industries continue to rely on APIs, and most plan to expand their API usage moving forward.

The rest expect their API usage to remain the same or felt unsure.

A complete breakdown of what percentage of companies said they expect to use more internal or external APIs sorted by company size can be seen below:

Developers who report more years of coding experience were more likely to predict that they would use APIs more or about the same in 2020 as they did in 2019.

Most Developers Use VMs to Deploy APIs

When we asked developers where they deploy their APIs, the most common response was VMs (48.8%). Serverless was a close second (41.9%) followed by Kubernetes (25.6%). Note: Multiple selections allowed.

Of the tech trends, we included in the survey, we found developers were most familiar with REST and most unfamiliar with gRPC. Likewise, REST was the most commonly used in production, while gRPC was the least.

This is the distribution of API Gateways our survey respondents reported using:

This is the distribution of API Design tools our survey respondents reported using:

Thank you again to everyone who participated in the RapidAPI Developer Survey! By sharing these results, we hope to give some additional insight into the API landscape and emerging trends.

How to Integrate External API in a WordPress Page