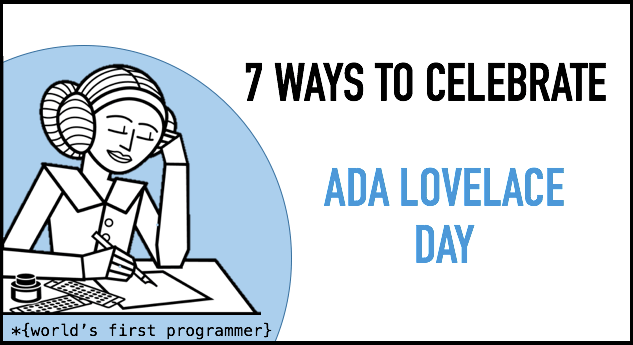 What did Ada Lovelace invent?

Ada Lovelace wrote the first computer program in 1843…one hundred years before the computer was actually invented.

When was Ada Lovelace Day Founded?

Ada Lovelace Day, on the other hand, was established in 2009 by Suw Charman-Anderson to celebrate the achievements of this programmer and other women in STEM fields.

The birth of this programmer-specific holiday rose awareness around this somewhat unknown historical figure, inspired a LEGO fundraising campaign, and, of course, started a #AdaLovelaceDay Twitter hashtag.

When is Ada Lovelace day?

Ada Lovelace day is every second Tuesday of October. The next one would be on 9 October 2018.

Rather than simply tweet about Ada Lovelace today, we decided to list other ways to celebrate the Mother of Computer Programming.

Thanks to Amazing Women of History for the license-free template drawing!

Ada Lovelace wasn’t just the world’s first computer programmer. She was also one of the first people to see the potential behind the so-called “analytics machine.” She envisioned a world where computers could create anything, even music, using variable inputs other than numbers. It was a pretty big step from calculating numbers and you can bet she got some grief for it.

While there are countless ways to honor this pioneer, we think the best way is to actually build something. It could be as small as a meme (she DID predict computer-generated graphics after all) or as a large as an original program. If you’re leaning towards starting your own programming project, get inspired by browsing our available API packages and checking out our API tutorials.

What if Ada Lovelace and Charles Babbage teamed up, not only to build the world’s first analytics machine, but also to fight crime?  Part history, part steampunk, you can learn about these programmers’ achievements while simultaneously imagining Ada Lovelace smoking a pipe.

We never knew we needed Sydney Padua’s webcomic in our lives, but we did. Bonus points–she also has an Eisner-nominated graphic novel.

We don’t actually need to convince you to take five, do we? Dedicate your regular coffee (or Reddit) break to watching a video on Ada Lovelace. Here are some of our favorites:

If you have five minutes or less:

If you have ten minutes:

If you have twenty or more minutes:

4. Get Motivated with Some Words of Wisdom

Ada’s father was famous poet Lord Byron, so it’s not surprising that the programmer also had a way with words. Save these quotes for your next #MotivationMonday post.

5. Donate to a Cause Promoting Women in STEM

Ada Lovelace Day often brings up conversations about female representation in tech. Mashable has a great list of non-profits addressing gender diversity in tech from a number of angles. Consider making a donation to support present and future female developers.

6. Go to an Ada Lovelace Event

There are a number of events around the world celebrating Ada Lovelace today. Head over to FindingAda.com to see if there’s an event in your corner of the world.


Ada Lovelace is often used as an example of a woman whose contributions go unnoticed due to her gender. While it’s great that we recognize her today, it’s all too easy to let that mistake happen in a field where women are underrepresented. Even some of our smartest innovators aren’t always proactive about seeking out female developer voices. A Guardian article recently came out that tech leaders don’t actually follow many women on Twitter.

One way to honor Ada Lovelace today is to check your Twitter. Are you a developer? How many of the people you follow are women? If the answer isn’t to your liking, today is the perfect day to change it. If you’re in the tech scene, Allyson Kapin, founder of Women Who Tech, compiled a list of 100 female founders and influencers worth following. If you’re a developer, check out this Twitter list of 543 women who code.

That’s our list! How are you celebrating Ada Lovelace Day? Are there any other programmer holidays that you celebrate?