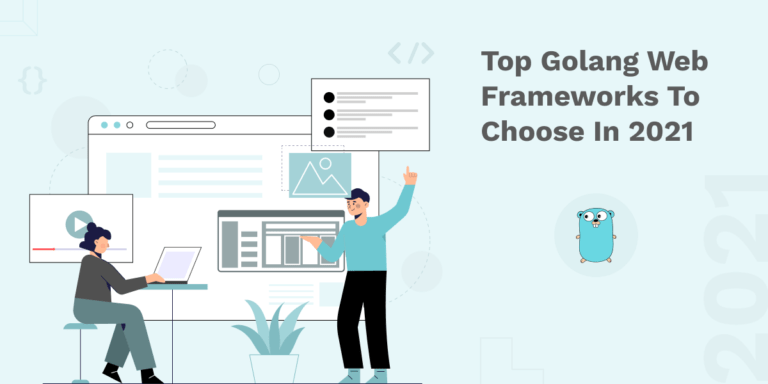 Golang has become one of the mandatory tools for developers to write APIs and for developing web services. It is one of the brilliant initiatives by Google that has surged in popularity among the developer’s community.  Many consider it the future of web programming as it offers clarity and ease-of-use and carries out most of the functions that other languages do separately.

Surveys confirm the reason behind Golang being the most popular language among developers is its reliance on quick server responses. Introduced by Google in 2009 to bridge the gaps of Java and C++, Golang helps developers shape their software strategies and deliver on time. Using Golang, developers can improve programming productivity and act as a watchdog, control concurrent users’ incoming data, optimize memory, collect garbage, and send regular tweets.

Google introduced it as an open-source language for developers to build reliable and simple software with no compromise on the control, performance, and experience.  Golang has become an ideal framework for businesses that expect a surge in service demands that could crash the existing infrastructure.

If you want to build something sturdy and robust for your mobile or web app development you must ensure that you understand the project’s requirements to select the right framework to utilize its features and functions. The following are the top Golang web frameworks for you to choose the right one.

Gorilla is the one of the biggest and longest-running Golang frameworks with a huge community.  It flawlessly serves Net/HTTP and saves a lot of time by reusing the components. Moreover, Gorilla is the most exceptional web framework as it facilitates many functions with the following features:

Goji is a lightweight Golang framework with simplicity and the ability to produce swift desired outcomes. Moreover, the best blend of composing and straightforwardness makes it ideal for developers working on different web projects to make an absolute number of apps.

Gin Gonic is one of the leading Golang frameworks as it is simple and easy to understand even for the new developers. Though it is a minimalistic framework, it possesses much-needed libraries. Therefore, it is the first choice for many developers as it enables them to build apps faster than other frameworks, provide clarity for seamless work, and helps in tracking problems and debugging.

Go craft is one of the popular Golang frameworks as it offers swift and scalable routing functions.  Though considered conservative, the built-in middleware helps to write or add additional functionalities.

With Go Mux tailor middleware package possessing casting and reflection abilities, it helps to type application code.  It has routing as an added functionality by the HTTP or net package from the benchmark library. For writing and creating backend apps, it is the right choice for developers giving precedence to performance.

Buffalo is a one-stop Golang framework for all web development as it helps from initiation to execution and from frontend to backend.  It is also used as an integrated web development ecosystem for diverse projects. With its dev command, it automatically observes .html and .go files to rebuild and reinitiate the binary.

Mango is one of the Golang frameworks with marvelous modularity and diverse libraries.  Though not maintained well and not having an active community, millions of developers use it worldwide.  A single HTTP server reuses its modules conveniently, effortlessly, and rapidly for sustaining code as self-directed.

Martini is a small but potent Golang framework that is supple for increasing the developer’s abilities for handling many functions with minimum overheads.  It is more of an ecosystem than a  framework for an effortless integration with third-party support and is light throughout.

Since it is extremely scalable, it helps to build compelling web applications and for writing Golang services. In addition, developers can use ‘reflection for feeding data into the handler function to add new apps’ services.

Beego is one of the rapid Golang frameworks which automatically refreshes tasks whenever it detects any changes.  It is similar to the inclusive Django framework of Python and is organized into eight diverse modules to use when needed.  Beego follows a model-view-controller pattern and does not need any third-party library integration.

Many developers favor its time-saving feature. Its logging framework helps them do things fast. It has HTTP elements, diverse logging systems, libraries for joint operations, an in-built cache handler, session management tools, and an ORM or objects relationship map for accessing data.

The above top Golang web frameworks will help you use it as per your need. For the past decade, Golang has gained popularity for web app development and solving Google-related problems.  It is why many famous companies like Uber and Twitch do not leave it to Google to solve it.  If you are also planning to go with GO, this article will help you choose the frameworks.

Deep Dive into API Governance with Examples & Use Cases