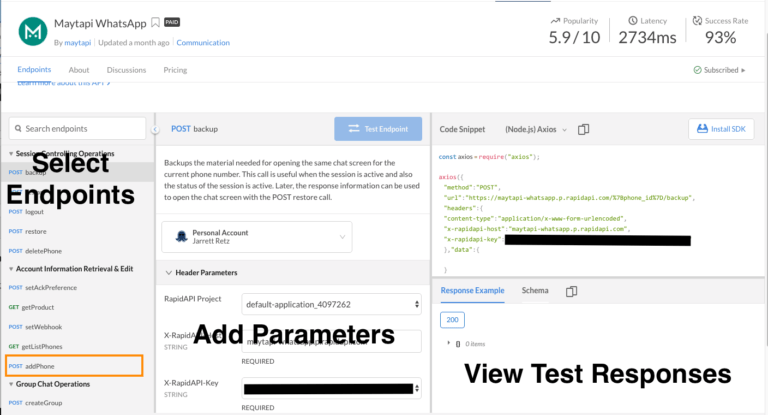 WhatsApp is a fast, simple, and secure messaging platform created by Facebook. Praise for the application typically comes from its ability to secure messages, communicate with large groups, message without fees, and communicate internationally for free.

It’s reported that the app has over 1.5 billion users.

How does WhatsApp API work?

An important distinction between WhatsApp, and SMS services, is that WhatsApp sends messages over the internet. That means there are not SMS fees and international voice calls do not typically incur charges. To use WhatsApp, a person needs;

Other features include the ability to send PDFs, Voice Messages, documents, spreadsheets, and slideshows.

The main feature is encrypted messaging, which in turn, receives a lot of criticism. Zak Doffman, in an article published on Forbes.com at the end of 2019 wrote;

So what’s the issue? Put simply, it’s that if WhatsApp cannot access the content, then law enforcement and government agencies cannot access it either. Not without compromising an endpoint, a smartphone. There is no level of pressure that can be applied to the platform to have it relent, no court orders or warrants, it is not possible for them to crack the encryption without a hack.

Encrypted messages are sent by—and in between—illegal entities without the platform’s ability to shut it down. Similarly, competing political factions in various countries have used the platform to communicate free from government spying.

A simple dive into your favorite search engine will yield plenty of information on the ethics of WhatApp (as well as alternatives like Telegram or WeChat). Alternatively, check out this BuzzFeed article on simple hacks if you’re interested in less controversial uses of WhatsApp.

In addition to messaging on the mobile app, a user can scan a QR-code with their phone to sign-into WhatsApp Web. This is essentially how we are going to integrate WhatsApp into our application. To start using WhatsApp Web;

Open https://web.whatsapp.com in your Chrome, Firefox, Opera, Safari or Edge browser and scan the QR code by using the WhatsApp app on your phone.  WhatsApp.com

In order to scan the QR-code in the app navigate to Settings > WhatsApp Web/Desktop. There you can see devices that are logged in and scan QR-codes.

Once scanned, a new browser tab opens displaying your chats and messages. Subsequently, messaging can now be executed from the browser. But, how can we integrate WhatsApp Web with our application?

Maytapi is an API that creates endpoints for a user’s WhatsApp account. Consequently, the user can send and receive text and media messages through WhatsApp in private chats.

For example—assuming I had already set up a webhook endpoint—if I sent a message using the API to a phone number, and that person responded on WhatsApp, I would receive a webhook similar to:

With this information, I could capture the response message or send another message using the number provided in the user object (which is the number of the person we sent the original message to).

Is the WhatsApp API Free?

Unfortunately, no. The MayTapi WhatsApp API is priced at $29/month for unlimited API requests.

One More Hypothetical Before We Integrate

After I sent the message, I would see a new conversation started in my WhatsApp chats on my phone. This is because the API is using my phone to send the messages. Furthermore, I could then chat with the other person in the app if they chose to respond.

We can easily configure a phone in the RapidAPI Maytapi Dashboard and I will walk you through the steps in the next section. In addition to configuring the phone, I will explain some of the other endpoints and provide an example integration on a sign-up form. Let’s begin!

From RapidAPI, search for “WhatsApp” or click this link directly to get to the WhatsApp API page.

From there, click on the pricing tab, and subscribe to the API. For only $29 a month, you’ll receive unlimited API requests.

How to Add WhatsApp Integration Into an App with JavaScript

In order to complete the example you will need to have a few things:

It may take a few minutes to check everything off the list but come back soon and continue!

Navigate to the Maytapi API on RapidAPI.

Add your phone number as the value for the number parameter. You will need to add the country calling code at the beginning of the number.

Next, click Test Endpoint further up on the page.

The response body shows up next to where the required phone number parameter was added. It will look like;

Make a note of the id parameter. This is your phone ID. It’s used in subsequent calls.

Next, on the left side of the screen select the getScreen endpoint.

Enter your phone id as the phone_id parameter in the middle of the dashboard.

If you lost your ID, the getListPhones endpoint will return a list of phones registered.

Finally, the endpoint returns a screenshot of the QR-code you need to scan with the phone you are trying to connect.

You may not be able to scan the small image and will have to open the image in a new tab.

Furthermore, the QR-codes changes frequently, so you may need to do this a few times before you catch a valid QR-code.

There are two ways to check that you are logged in:

Good work! The phone is now set up properly.

We can send a test message to ourselves using the sendMessage endpoint in the RapidAPI dashboard.

Once sent, there should be a new chat on your smartphone with the text you sent in the message parameter. If you already had a conversation going with yourself, the message will go to the previously created chat.

I set up a small sample project that was bootstrapped with Create React App. Additionally, the project uses Netlify functions as serverless functions.

If we use Netlify functions, Netlify command-line-interface, ngrok, and Create React App we can set up a development environment that acts as a front-end, back-end, and has the ability to consume real webhooks sent to a proxy URL that’s set up with ngrok.

We can do this all in our project directory, without having to set up a code up a server and add a lot of code.

As a bonus, we are also using the REST Countries API on RapidAPI to retrieve a list of countries and their corresponding country codes. The data returned is fairly comprehensive in each country and the API is free. The response from this API generates the country list for the select input in the form.

If you are coming from an Express background, think of the functions folder as separate routes. After the development server is running on localhost:8888 the functions can be reached at /.netlify/functions/[function name].

Furthermore, the lambda folder is the compiled version of our code fields in the functions folder. You can read more about configuring the file system in Netlify’s docs.

Clone the repository from Github:

Change directories into the project and run npm install. It will need some time to install the dependencies.

In the project root create a file .env. Inside the file add:

Next, open up the file sendMessage.js. Change the URL on line 18 by replacing PHONE_ID with your four-digit phone ID.

After that, at the top of the file, import your RapidAPI key from the environment or hardcode it into the headers variable for testing purposes.

Our applications will be accessed at http://localhost:8888.

We need to set up a reachable URL in order to test the response webhook. To do this run ngrok http 8888 in a new terminal.

Next, take a look at the first line labeled ‘Forwarding’. Copy that URL and head back over into the RapidAPI dashboard. The URL will be something similar to http://idnumber.ngrok.io.

In the dashboard, select the setWebhook endpoint. Scroll down and enter the URL you copied, but combine it with /.netlify/functions/webhooks.

Inspecting the webhooks.js file reveals that we are logging the response data to the console when a webhook is received.

Finally, back on your phone in the chat, type a message in response to our programmatically sent message.

2. The terminal running ngrok will display the endpoint that received the webhook with a status code (200 if it worked)

And there you have it! To recap we now have a:

To sum up, the tutorial may have seemed fairly opinionated, but the concepts and vital code are not. The API call made to send a message (in sendMessage.js) will work in virtually any other setup that runs NodeJS. The same goes for the webhook URL. The webhook is a simple POST request coming from the API and can be handled in numerous ways.

I did not give examples on group messaging or sending images, but there are examples on RapidAPI and examples on Maytapi that are easy to reproduce now that you know how to use the API.

This set up might make you spam crazy and tempted to unleash your marketing mania on everyone with a WhatsApp account. However, sending a message to someone outside of your contact list may get reported as spam. Additionally, you can be banned if you are tagged as spam a few times (5 – 10). Maytapi has more tips on not getting banned on their website.

How to Use the Veriphone API with Python, PHP, Ruby & Javascript Examples

How to use SMS API with JavaScript (5 SMS API Examples)

How to Verify SMS with the TeleSign API

How To Use the WhatsApp API with Python

How to use SMS API with NodeJS