Blog » Pop Culture » What is the Difference between Bitcoin and Blockchain? 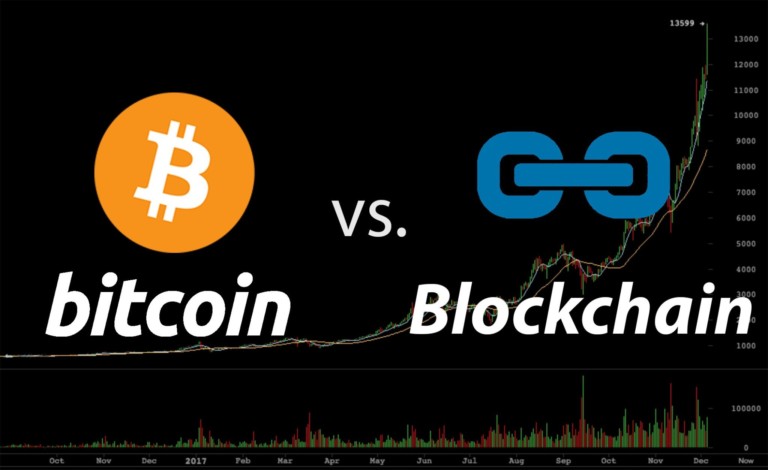 On December 7th, 2017, the value of one bitcoin surged to more than $16,000. Quite a feat for the first decentralized cryptocurrency, something that was once ridiculed by just about every financial institution and business. Interest in Bitcoin has skyrocketed in recent months, and it’s not just Bitcoin that’s generating a lot of buzz. Blockchain technology has also been garnering a lot of attention recently. In August, six of the world’s largest banks teamed up to work on a blockchain settlements project called utility settlement coin.

Bitcoin is a Decentralized Cryptocurrency

Users acquire bitcoins by accepting them for goods and services or by mining, a complicated process where specialized computers are used to solve mathematical problems to verify bitcoin transactions. These mathematical problems are embedded in the blockchain technology that runs Bitcoin. Bitcoins exist only digitally and are kept in a highly secure wallet. When Bitcoin users want to turn their bitcoins into fiat money, they can use cryptocurrency exchanges to trade them for fiat currency or other cryptocurrencies.

Blockchain is the Underlying Technology that Runs Bitcoin

Blockchain is the underlying technology that runs Bitcoin. It’s a distributed public ledger that records and saves a record of every single transaction. Blockchain technology allows payments and other digital information to be exchanged without the need to authenticate transactions through a central authority or third-party institutions such as banks, stock markets, and governments. This is because public and private blockchains are managed by decentralized, autonomous peer-to-peer networks that verify transactions (via network nodes) – essentially vouching for both parties involved in a transaction without the need for a central institution. Once the transaction is verified by network nodes, it is recorded in a distributed public ledger which is called a blockchain. Blockchains are typically public, but the parties involved in a bitcoin transaction can encrypt specific information so that it remains private.

Blockchain technology allows funds to be transferred anywhere in the world securely, inexpensively, and in a matter of minutes. The applications for blockchain technology are boundless. Blockchain could be used to build systems for e-voting, fraud prevention, trade settling, international payments, and so much more.

Today many well-known companies including Overstock, Microsoft, and Expedia are allowing customers to pay for purchases using Bitcoin. Some companies like Overstock accept not just Bitcoin but all major cryptocurrencies. Some of the world’s largest banks and financial institutions now view blockchain as an innovative technology that could be used to conduct fiat currency-based transactions. With so much interest in these cryptocurrency technologies, the future looks bright for Bitcoin and blockchain.

Check out the top Cryptocurrency APIs we’ve reviewed to help you start building your project.

How to Use the CoinGecko API with Python, PHP, Ruby, & JavaScript Examples

How to Build an App with Node.js & TypeScript