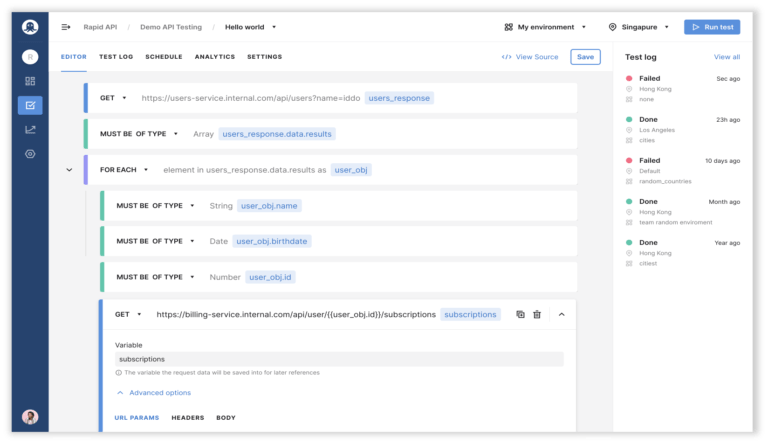 Don’t know where to get started? Jump to:

What is API Testing?

API testing is a type of software testing that involves testing application programming interfaces (APIs) directly and as part of integration testing to determine if they meet expectations for functionality, reliability, performance, and security.

The main drivers to invest in software testing are to ensure three main things:

In the context of this article on API testing, we will be focusing on REST APIs and GraqhQL APIs.

A test case defines the inputs, outputs, and testing procedures. RESTful APIs specify the inputs that it needs and the outputs that a client can expect based on the input.

In software engineering, a test case is a specification of the inputs, execution conditions, testing procedure, and expected results that define a single test to be executed to achieve a particular software testing objective…

The architecture of web APIs is set up to promote the use of formal or informal test cases. For example, an API has an endpoint. That endpoint has a specification for the inputs that are allowed. If the correct inputs are provided to the API endpoint (request), then the API will return data—or the output (response).

When testing APIs, test cases can be designed for each endpoint or a group of endpoints that are designed to work together (i.e a functional flow like logging in).

Conceptually, testing REST APIs is straightforward. However, with any testing, there is always a difficult decision of what to test.

When determining what to test with an API, it’s helpful to understand the different categories of tests.

Security testing checks how well the API is protected from malicious actors. It ensures that resources (data) are protected and only provided to authenticated or authorized clients.

Functional testing checks whether the endpoints are satisfying their requirements. Functional and security testing have more options when it comes to testing. Some of the things that are tested include:

Connectivity determines if the API is responding and operational. If you are focusing on the connectivity of an API, you may execute a simple “ping” test to make sure that the server is responding.

Each of the above categories and subsequent testing factors increases the complexity of large scale API testing. When an organization looks to start planning its APIs, certain challenges with API testing arise.

API monitoring is the process of observing the functional, availability, and performance metrics of an API. The API could be an internal, external, or third-party API that is relied on by another application.

There are many free APIs out there that are available for testing, including:

The process of testing software during development helps find problems early. But running the tests manually can easily become tedious as a project grows in size. Testing automation makes development more enjoyable for developers. We can forget about running tests and focus on development.

Learn how to automate API testing.

One of the biggest challenges with API testing is the initial set-up. It’s difficult to build an API and then have to go back to create tests after the API has been created. This becomes harder if the API design and build process were already strenuous. However, getting ahead of the game brings its own problems because there can only be so much foresight in design. Some latency expectations and data validation may tweak causing side effects with individual tests.

Other challenges with API Testing include:

API testing tools have become the solution to the problems of API testing. They offer features like creating specifications, mocking, and automated testing.

API testing tools have expanded to support different environments, API collections, and cloud integration. All of these features aim at simplifying the test process.

When looking around for an API testing tool, you want to pay attention to a few features:

Reducing the amount of manual work by integrating with current cloud services, or popular specifications can reduce the barrier to start testing. Furthermore, APIs can have many endpoints. The ability to organize endpoints and environments helps with complexity. Finally, you don’t want to be constrained by your system. Writing custom code and chaining together different URLs is an advantage that many testing tools now offer.

Some examples of API testing tools include:

Check out some of the best automated testing tools here.

What is RapidAPI Testing?

RapidAPI Testing is a cloud-based API testing tool that allows you to create comprehensive API tests (as well as monitor APIs). With RapidAPI testing, you can test all of your REST APIs. There is also support for SOAP and GraphQL APIs. This API testing tool integrates with a user’s internal or external APIs that may already be on RapidAPI.

The RapidAPI testing dashboard lets users see all the APIs connected to their accounts. Then, they can jump into the test suite for each API.

The API testing tool wants to make test creation easier. That’s why the service offers automatic test generation by integrating with a user or organization’s existing APIs on RapidAPI.

Also, you can build steps manually, or move steps around using the graphical user interface. In the testing tutorial, we’ll show you how to:

I think you’ll be surprised by how intuitive it is to create your tests from new or existing APIs.

For a comprehensive tutorial on how to test API endpoints using RapidAPI Testing click here. In the tutorial, you’ll be guided through these steps:

RapidAPI Testing is designed to integrate with all your APIs and provide the features that are essential for developing and monitoring APIs from beginning to start.

In this article, I gave you a brief introduction to API testing. Furthermore, I explained testing tools and what RapidAPI Testing is used for. Then, I took you through a tutorial on how to set up a mock API and start testing on RapidAPI Testing. I hope that you realized how helpful a well-designed API testing tool can be!

Testing should make your life easier. RapidAPI Testing wants to integrate your existing APIs with an easy-to-use graphical user interface. There’s plenty to explore with RapidAPI Testing so make sure you take a look at the documentation as well. Click here for additional API testing tips.

What is unit testing?

What is functional testing?

Functional testing checks the requirements of a software module, or function, by providing inputs to the module and examining the outputs.

What is a RESTful API?

REST stands for Representational State Transfer, so a RESTful API follows the guiding principles of the REST API paradigm. The REST guiding principles include a stateless client-server interaction. Furthermore, the API is interacted with on a uniform interface.

3.5/5 - (4 votes)
« Test APIs From Development to Deployment with RapidAPI Testing
How To Use the Kairos API With Ruby on Rails »