With APIs increasingly becoming essential components for software development, it has become vitally critical for developers and programmers to perform API tests. API testing is a process that focuses on determining whether an API that has been developed meets the anticipated threshold in terms of functionality, performance, reliability, and security. And since these tests are vitally essential, you need to utilize the best API testing tools out there. Owing to the hundreds of testing software in the market, we have taken our time to compile a list of the best API testing tools in the market.

RapidAPI is the world’s largest API marketplace with over 1 million developers and 10,000 APIs. RapidAPI Testing is a RapidAPI product that provides a functional API testing solution for creating and managing comprehensive API tests from development to deployment. Tests can be run for any type of API (including REST, SOAP, and GraphQL).

Check out a quick tutorial here.

2. Paw (The most advanced API tool for Mac)

SoapUI is an API testing tool that is ideal for complicated test scenarios as it allows developers to test REST, SOAP, and Web Services without any hassles. It gives the user a full source framework as it is wholly dedicated to API testing.

Launched initially as Chrome plugin, Postman has evolved to become a top-tier API testing tool. It is ideal for those who want to test APIs without coding in an integrated development environment using the same language as developers.

If you are looking for a framework to test REST services in Java, Rest-assured is a perfect choice.it is an open-source platform with Java Domain-specific language that makes testing REST service simpler.

Although JMeter was purposely created for load testing, it is a fantastic tool for functional API testing. It comes with a plethora of API testing functionalities and extra features to make the process more efficient.

Another open-source framework for API testing is Karate DSL. It is based on a cucumber library, and it helps create scenarios for API-based BDD tests in a simple way without the need to write

Apigee is another cutting-edge platform for API testing. The cross-cloud API testing tool permits you to measure and test performance, supports, and create an API with the help of other top-notch

editors such as Swagger.

Assertible is a world-class API testing tool that focuses on automation and reliability.

If you are looking for a continuous testing platform for Agile and DevOps, Tricentis Tosca has got you covered.

Test APIs From Development to Deployment with RapidAPI Testing

How to test an API Manually 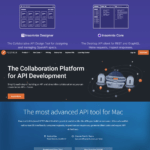 Insomnia vs. Postman vs. Paw